Victims of Scott McWilliam's alleged criminal activities have begun hearing responses from the Florida Attorney General's Office. A new Florida Attorney General was sworn in in January. Marty Norfleet is one of the first to hear back regarding the next steps for the criminal followup on Scott McWilliams. If you are a victim of Scott McWilliam's sales of fraudulent Star Wars collectibles, in addition to pursuing civil action (more on this later), I encourage you to contact the Eighteenth Judicial Circuit State Attorney's Office and the Seminole County Sheriff's Office to provide additional information for the investigation.

Here are copies of the letters to Marty: 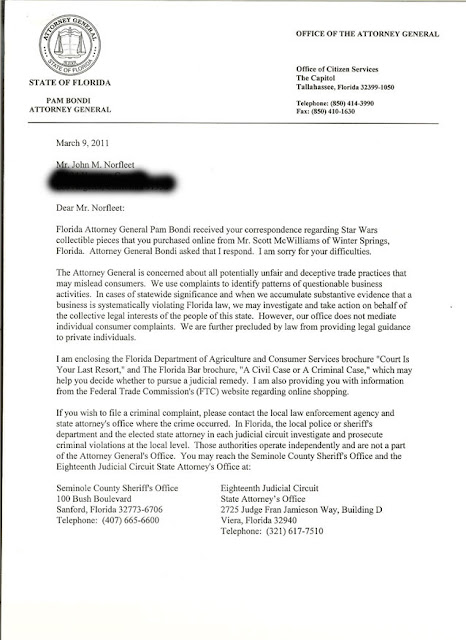 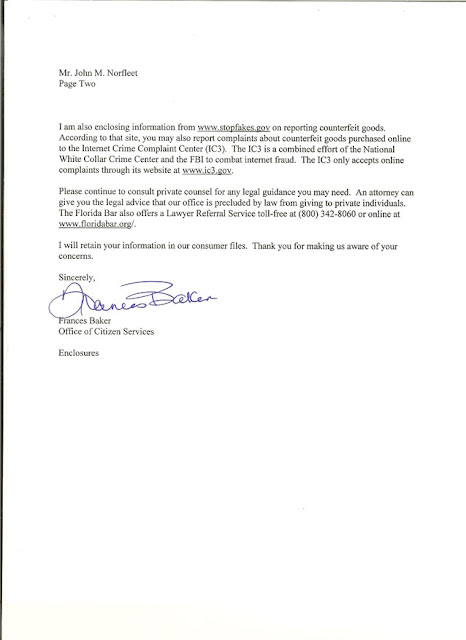 Posted by greenharvest at 2:57 PM 2 comments:

One of the most informative sources of information regarding this scandal was this thread that appeared on Rebelscum when this first went public. Since Philip received a legal threat from Scott's lawyer (previous entry) the Rebelscum staff made the decision to take the thread down. It is reposted here from a saved copy from a reader before it was removed, and did not come from anyone from the Rebelscum staff.

Since this is a public thread, there are many opinions and facts by various posters, we are not endorsing any specific statements, but encourage everyone to read through it to get up to speed on the issues. It serves as an excellent resource on the Scott McWilliams matter. If Scott would like to comment on any of the statements from the Rebelscum Thread, I welcome him to do so and will post here. Here's the link:

Following the thread on Rebelscum, Scott McWilliams issued a legal threat to Rebelscum's owner, Philip Wise, and to Chris Fawcett and Chris Georgoulias, who made some initial posts about the scandal. On receipt of the letter, Philip called Scott's attorney and left a message to return his call, but the attorney never returned the call. The legal letter is attached here: 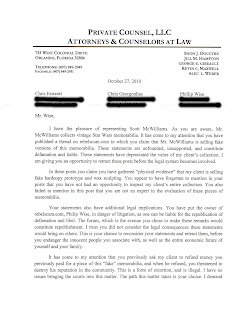 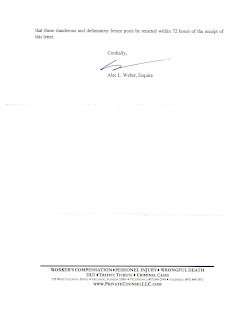 Some observations about the letter:

1. In the fourth sentence, "Scott's attorney" confuses the concept of "libel" with the term "liable", a rookie mistake that even the layperson with cursory understanding of legal concepts would not make. Suing someone "for liable" is analogous to saying a prosecutor is going to "indict someone for guilty".
2. The letter makes a number of unsupported assertions such as "the statements are unfounded..." and "you have also failed to mention in this post that you are not an expert..." without explanation.
3. For a legal letter, there is a lot of informal language that is imprecise, e.g. "you have a thread on" (not clear as to actions/involvement), "before the legal system becomes involved" (veiled threat, but what the hell does that mean? isn't the legal system already involved?), and "I have no issues bringing the courts into this matter" (another imprecise threat without specific consequence)
4. The footer on the stationery suggests that the law firm where Alec Weber practices specializes in worker's comp, wrongful death, DUI, traffic tickets, crimes, and "personel injury" (sic). I'm not aware of "personel" injury as a specialty of law, but one could interpret it as meaning "personal injury law" or a misspelling of the word "personnel". Either way, it's wrong, and I'm surprised for something standard like the law firm's letterhead, that such an embarrassing error would be left uncorrected. Furthermore, it doesn't appear the law firm specializes in libel, defamation, slander, or fraud, so Scott may not have picked the top legal team for the job. He certainly didn't pick the spelling bee champ or the valedictorian at his law school.
5. It is odd that Scott's "attorney" did not return Philip Wise's call. I'm no legal expert but I would expect that a response to a legal threat would be a followed up by the attorney.

My impression reading this letter is that since it's lacking supporting facts on the allegations and since Scott has avoided public comment, that this is more an attempt to silence critics rather than address unjust accusations via threat of a civil lawsuit.

With that said, I welcome Alec Weber or Scott McWilliams to clarify any of these points which I'll happily post on this blog. If Scott wishes to silence this blog via legal threat or sue me for "liable" or "personel injury" my mailing address is:

I'm starting this blog to build awareness and document a scandal surrounding vintage Star Wars toy prototypes sold by collector, Scott McWilliams over the past few years. This blog is called "Green Harvest" in a nod to the faux title of the Star Wars film "Return of the Jedi", and the reference to alleged production of green Dynacast hardcopies of the Star Wars action figures. The scandal emerged from multiple accounts from customers of Scott's deals of rare prototype items that were inconsistent with Kenner's practices during the vintage Star Wars era (1977-1986). Scott had asked many of these customers to keep the deals secret, but as these customers shared information, a larger story was assembled. The scandal first went public in a post by Chris Fawcett to rebelscum.com in October 2010:


RS community,
I, as well as some other involved parties, need to bring a very important issue up to the community in regards to a very widespread scam that has surfaced recently involving fake prototypes.  This has been going on for at least five years, but it has only been in the past few months that people have started comparing notes and the startling truth has come to the surface.
A collector by the name of Scott McWilliams who lives near Orlando has been selling fake hardcopy and wax prototypes to collectors.  These include both painted and unpainted prototypes in materials visually similar to carbalon, dynacast and other less common materials.
If you are a member of other forums or clubs, or a web master, we would ask that you please disemeninate this information to as many people as possible so we do not have any further victims of this scam.
Some of the physical evidence:
1. Parting lines with identical match to production figures and sometimes mimic production flaws.
2. Poor quality paint jobs that do not match the detail an fineness of KEnner originals.
3. Figures not sized correctly - too big or too small or limbs not sized right to the torsos.
4. Figures cast off UK variants that wouldn't have been Kenner HCs.
5. Details that are poor quality, rather than being sharp.  This is especially evident when comparing the fakes to known originals.
6. Evidence of filled peg holes.
7. Evidence of sanded off dates.
8. Poor pin placement on limbs, inconsistent with Kenner originals.
9. Missing details (gun holster holes filled in for example)
10. Internal material features (inside peg holes or looking at broken parts) don't match internal features of real examples.
11. Air bubbles on the hardcopies that were painted, which is inconsistent with the Kenner practice of painting only very good castings.  Legitmate HCs with air bubbles have always turned up unpainted.
12. Colors that don't quite match dynacast or carbalon of known real examples.
13. A UV light test on certain HCs reveals differences between real and fake HCs.
14. Paint is too glossy on some HCs as compared to Kenner originals.
15. Painted pieces showing very little signs of age that should be apparant on 20-30 year old pieces.
While the above is a generic description of flaws seen across many pieces, some buyers have agreed to come on to this thread with their figures and post specific examples.  These will be forthcoming in the next couple weeks.
Some of the ancillary evidence:
1. Confirmation of Scott lying about provenance.  One example is claiming to have bought pieces from the Earth.  THe Earth was contacted and had no record of selling the pieces.  Scott also claimed to have bought from 3 Kenner sources, all of who have been contacted and deny selling anything to him.  In one instance the Kenner contact had never even heard of Scott.
2. Bait and switch by sending different figures than the photos sent to the buyer
3. Claiming pieces being sold were the exact one from the Star Wars Collector's Archive when they were not
4. Quickly and easily offering refunds without any desire to defend the pieces, nor asking questions about why the buyer thinks they were fake.
5.  Skipping out on an authentication meeting with a buyer and Tom Derby at C5 for the $15k Jawa figure.  Why would you skip out on a $15k sale if you knew the figure was legit.
6.  Completely ignoring collectors phone calls and emails since C5.
This post has two purposes.  First to warn everyone in the community to be very careful of buying hardcopies and make sure they do not trace back to Scott.
Secondly, we're putting together a list of victims in order to start legal action.  If you have bought pieces from Scott, have any questions, or think you might have been scammed and want to join our effort to attempt to get reimbursement, please contact me at hcscam@12back.com
I'm sure there will be lots of questions and I, as well as others, will attempt to answer them.
THank you.
Cj


CJ's post and the entire follow up thread was removed from Rebelscum following a legal threat from Scott's attorney. As far as I'm aware, Scott never publicly responded to these allegations, although if he wishes to respond to anything on this blog I would give him the opportunity to address any points. Although initially some of Scott's customers got refunds for the items that were shown to be inconsistent with Kenner's practices, as the scandal snowballed, Scott's remaining customers were unable to reach him and did not get refunds.
Posted by greenharvest at 12:53 AM 6 comments: